How to include sub project data in your Word or PowerPoint template?

In the previous article, we learned how to build a Word or PowerPoint template to export project data. In this article, we will learn how to include sub project data in the generated report.

When exporting project data from a program or a project that has been broken down into smaller projects to create a project hierarchy, you may want to include sub project data into the generated Word or PowerPoint report.

There are multiple ways to include sub project information in the generated report. You can:

As explained in this article, schedule tasks and project impacts can be set to be reported to the parent project or program. 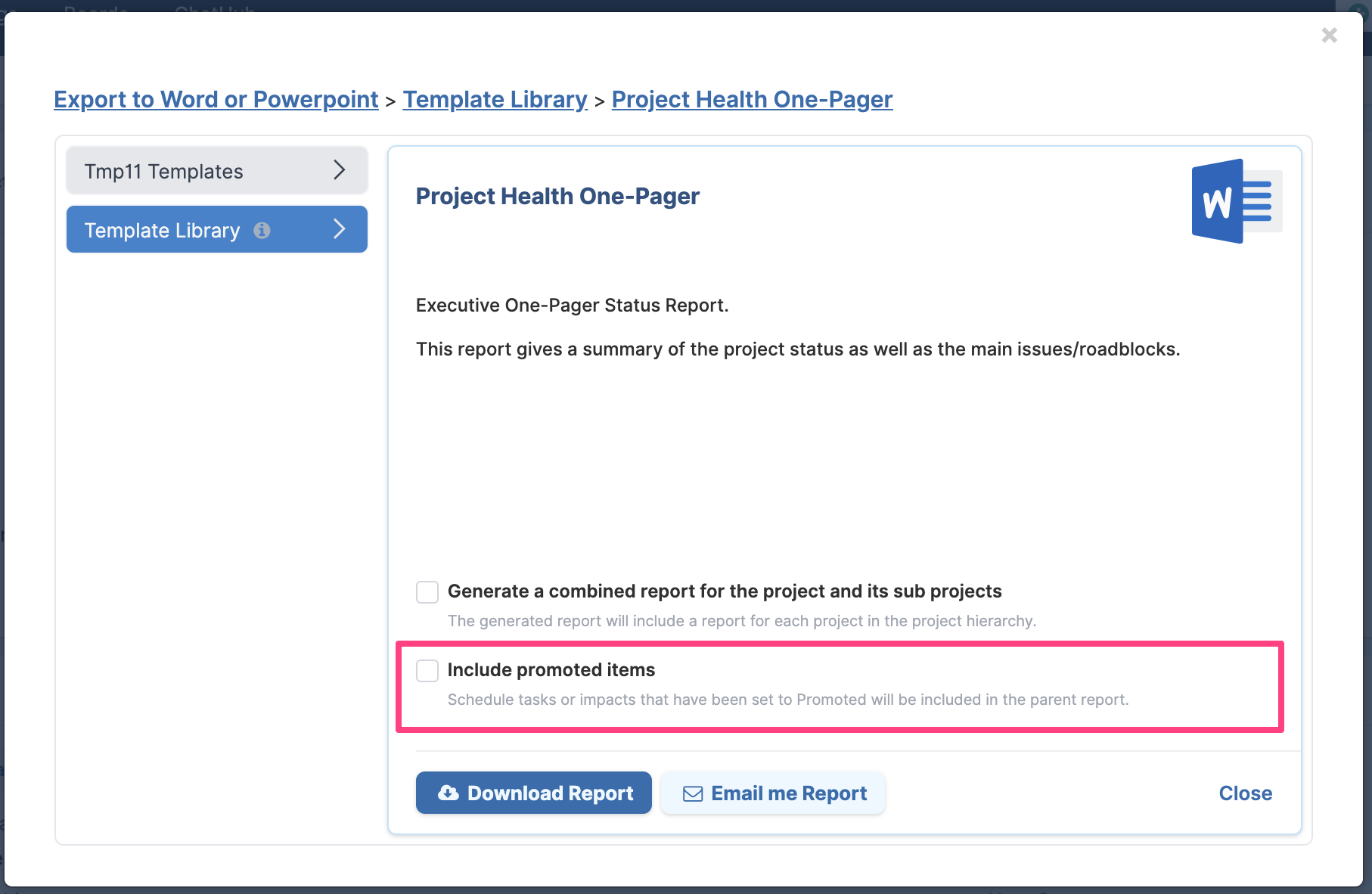 The image below gives a graphic representation of how including promoted items works. Project 3 and Project 5 have promoted impact items whilst Project 4 and Project 7 have schedule tasks that have been promoted to the parent project. The generated report will include all promoted items.

2. Including a report for each sub project

The other option to include sub project data in the downloaded report is to iterate the same template through all projects in the hierarchy. The generated report will then include a full report for each project in the hierarchy.

To iterate the same template through each sub project, you need to select the checkbox to generate a combined report before clicking on the Download button. 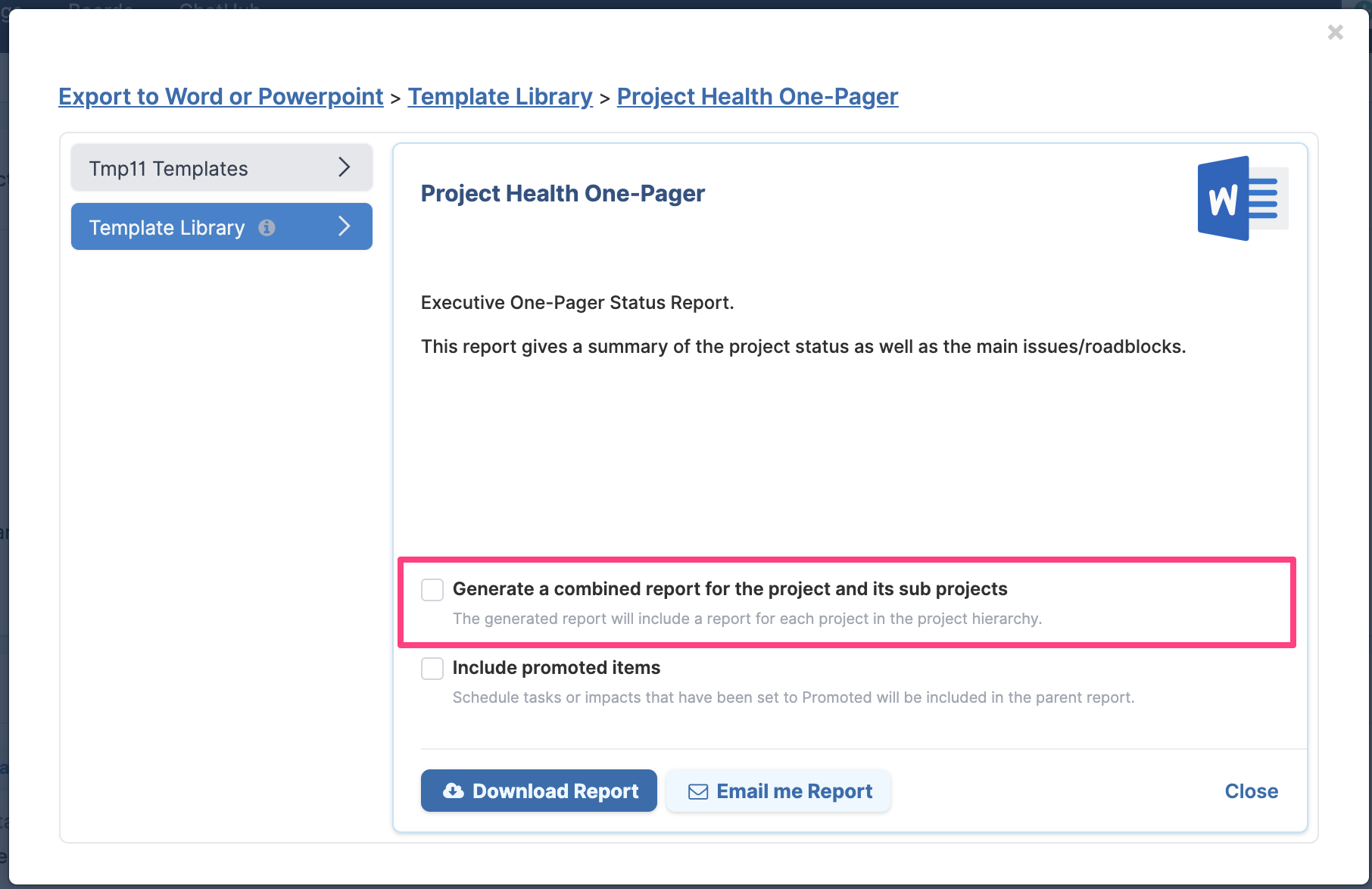 As you can see in the below image, selecting the combined report option will generate a unique report that includes a report for each sub projects.

3. Repeating slides for each sub projects (PowerPoint templates only)

If you are using PowerPoint to build your project report template, it is possible to indicate if a slide should be repeated and applied to each project in the project hierarchy.

You can for instance build a PowerPoint template that has a cover page, some slides specific to the parent project you are running the template from and some slides that are applied to each project in the hierarchy. You can see an example of a template using repeating slides in the Project Health PPT document attached to this article.

The slides that need to be applied to each sub project must contain one of these keywords: 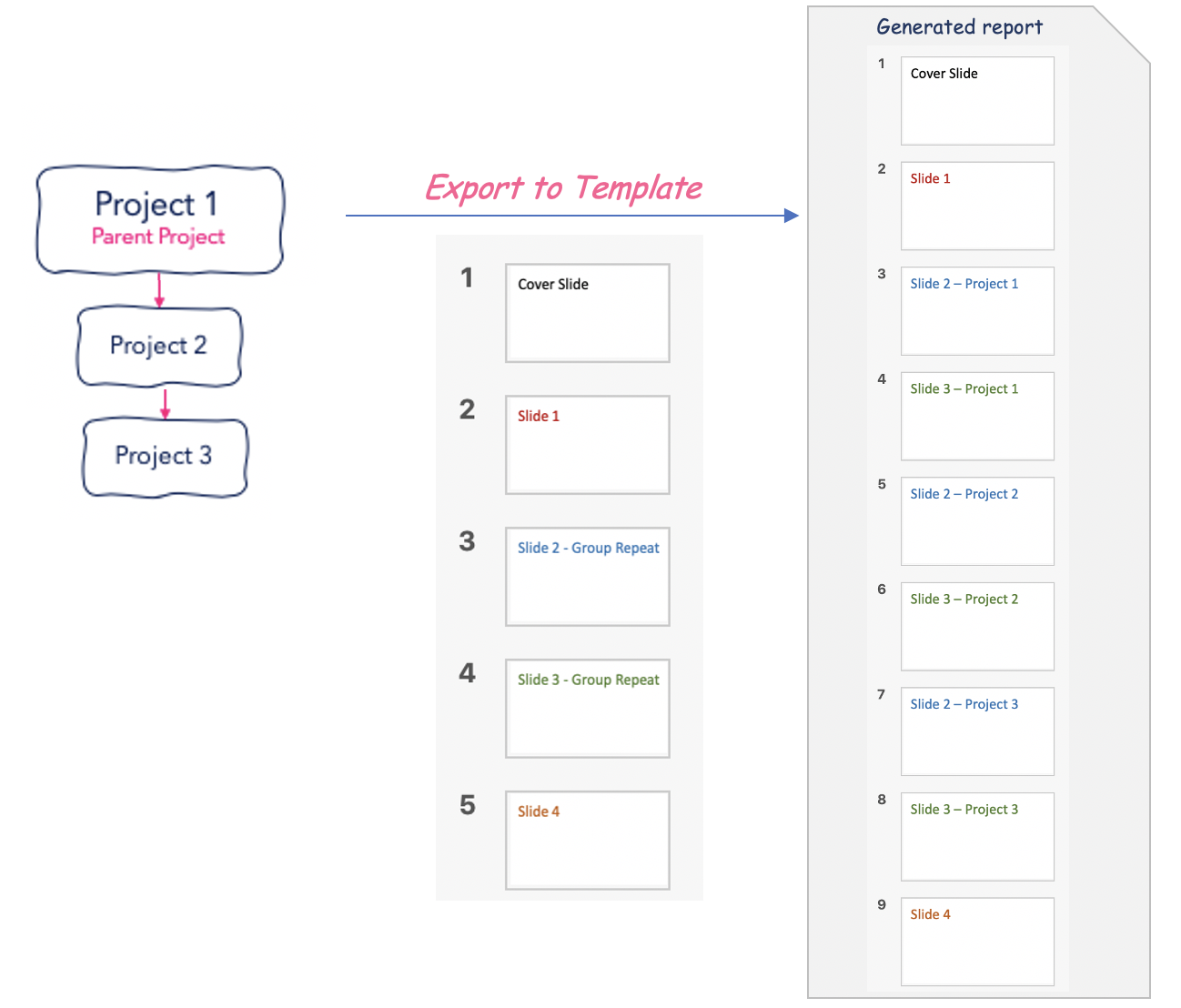 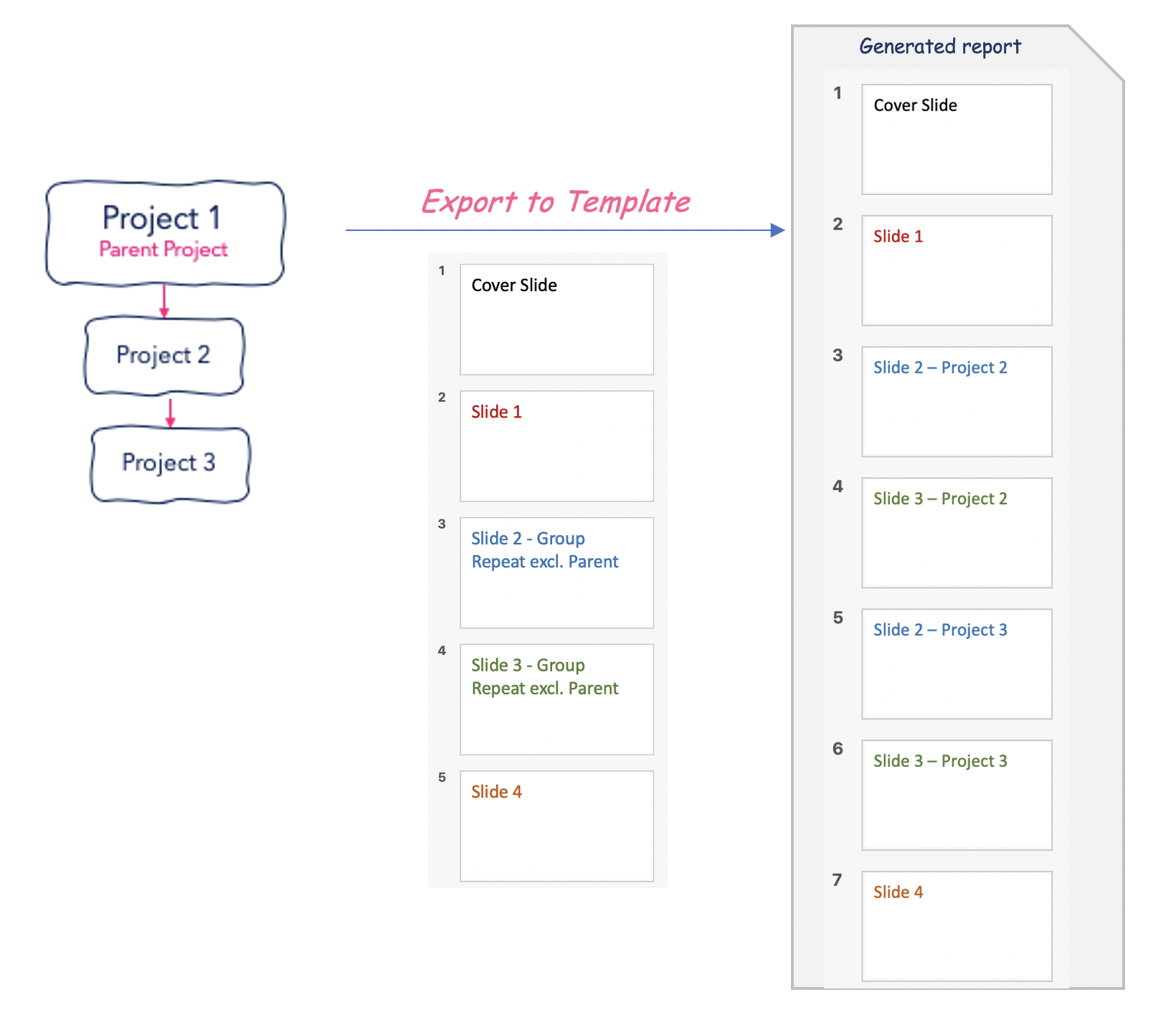 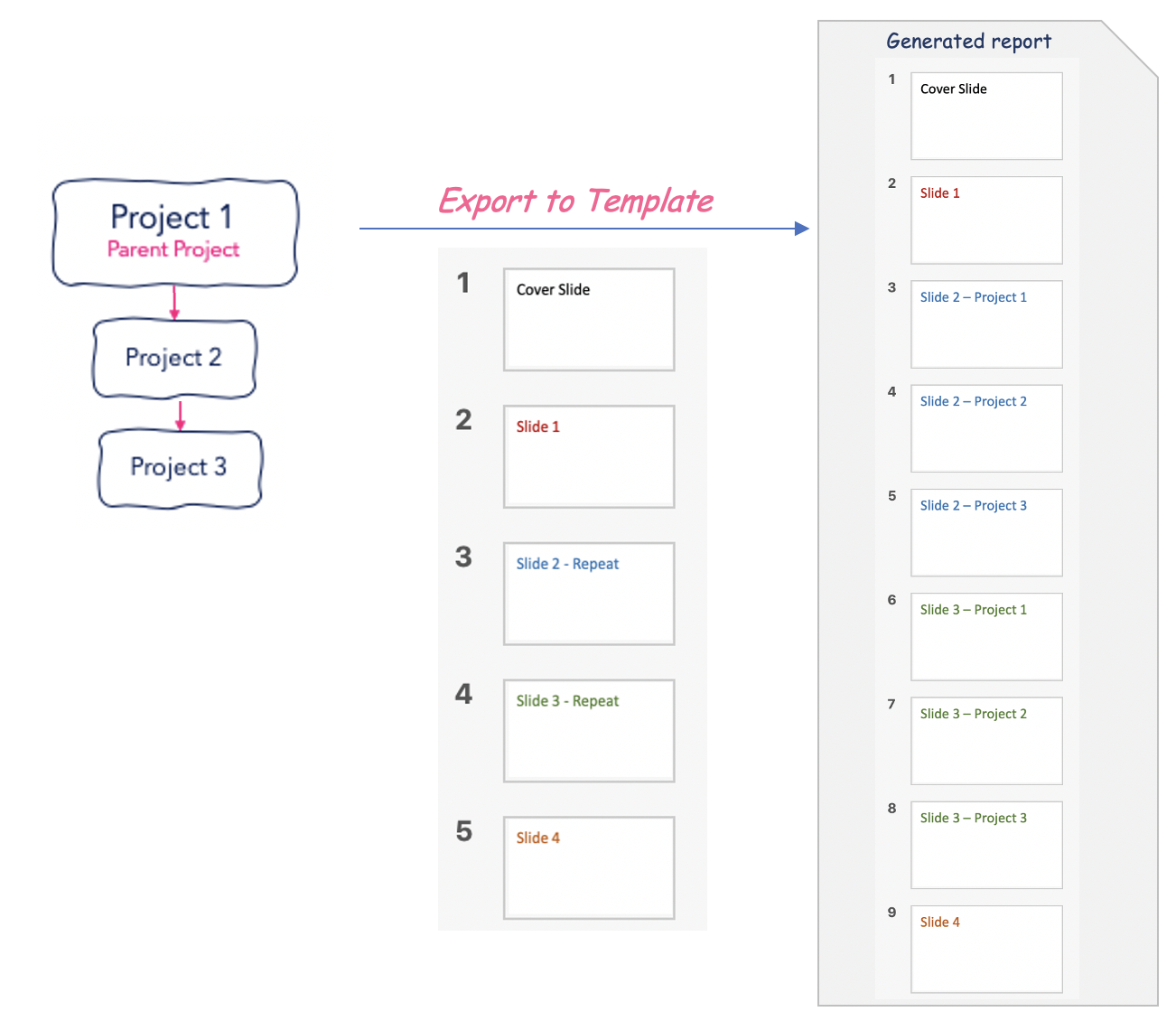 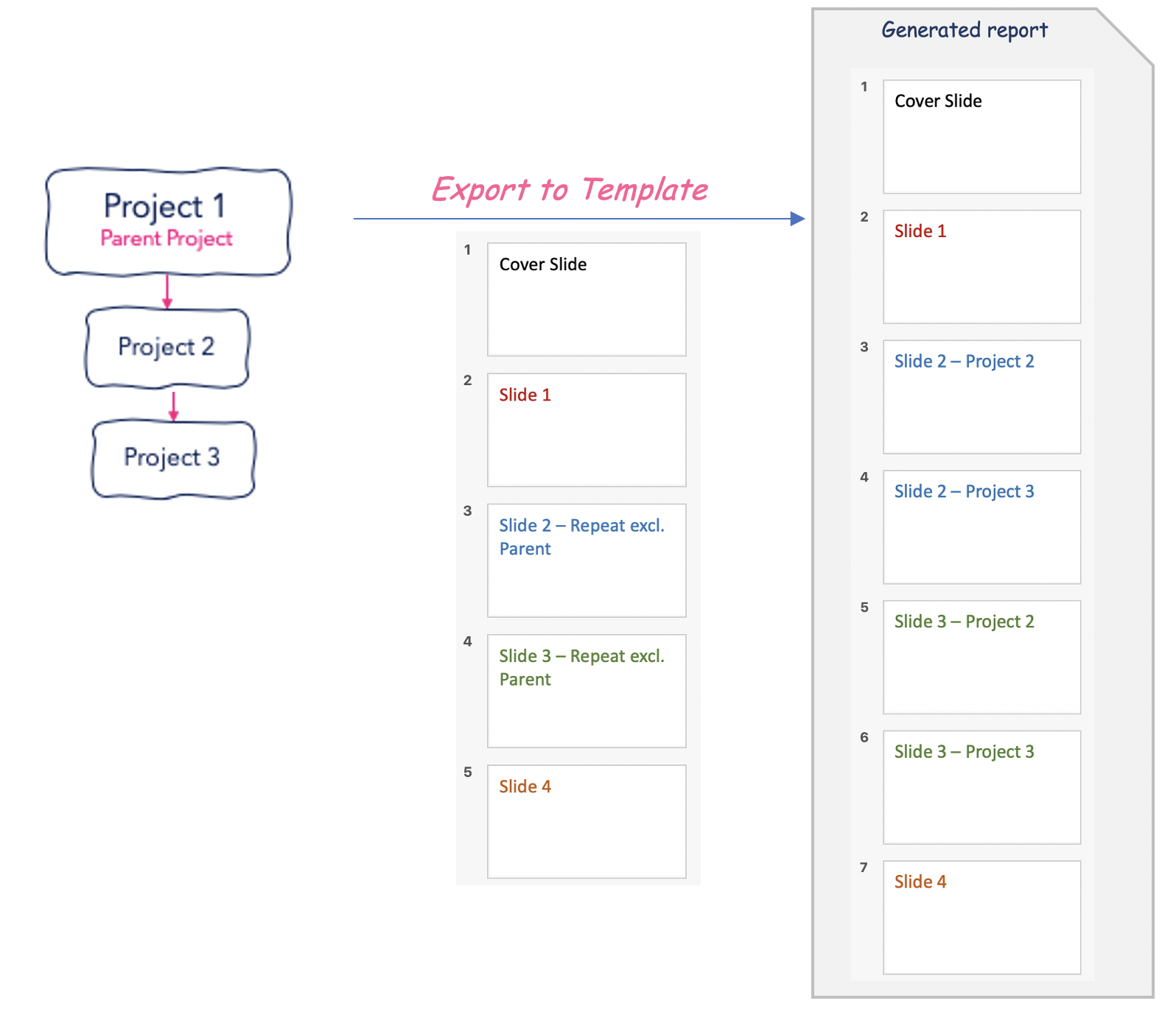 4. Exporting project details, status and financials in a single table

There may be cases where you may want the data from different projects be aggregated in a single table as opposed to having a report for each individual project.

The image below shows an example of a report that includes a summary table of different project status.

To achieve the above result, the table must specify the [REPEAT_ROW] keyword.

An example on how to use the [REPEAT_ROW] keyword is also given in the Project Health List document attached to this article.

[REPEAT_ROW] keyword works differently depending on whether the template is run from a watchlist or a parent project.

The project data that can be returned in the table include:

You can find the list of binding elements to use for each type of data here.

Was this article helpful?

Thank you for your feedback

Sorry! We couldn't be helpful

Thank you for your feedback

We appreciate your effort and will try to fix the article

Articles in this folder -